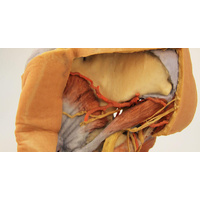 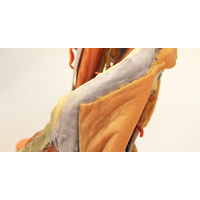 The specimen has been sectioned transversely through the fourth lumbar vertebra, displaying the cross-section of the musculature (epaxial musculature, psoas and quadratus lumborum muscles) and cauda equina within the vertebral canal.

The ventral and dorsal roots of the cauda equina are also visible exiting the intervertebral and sacral foramina in the sagittal section.

The abdominal aorta is preserved from the fourth lumbar vertebra to the bifurcation into the common iliac arteries; the root of the inferior mesenteric artery, lumbar arteries, and median sacral artery are also preserved. At the level of the sacral promontory, the common iliac artery bifurcates into the external and internal iliac arteries. Superficial to the sacral ventral rami the major branches of the internal iliac artery are visible (iliolumbar, lateral sacral, superior gluteal, inferior gluteal, internal pudendal, obturator, superior vesicle, obturator, uterine). These latter arterial branches pass to the sectioned bladder (collapsed against the pubis and receiving the ureters), uterus and vagina. The pelvic viscera (bladder, uterus, vagina and rectum) are visible in the midsagittal section extending to the anterior and posterior triangles of the perineum; in the anterior triangle the sagittal section of the clitoral body and part of the corpus spongiosum are visible inferior to the pubic symphysis.

The external iliac artery passes anteriorly along the pelvic brim, giving rise to the inferior epigastric and deep circumflex iliac arteries before passing deep to the inguinal ligament. The psoas major and minor muscles pass lateral to the external iliac artery, with the femoral nerve and lateral cutaneous nerve of the thigh resting on the superficial surface of the iliacus muscle.

The fascia lata inferior to the inguinal ligament has been removed to expose the muscular borders and contents of the femoral triangle (and surrounding anterior and medial thigh musculature). The great saphenous vein is visible joining the femoral vein adjacent to the femoral artery, with the branches of the femoral nerve just overlying the deep artery of the thigh. The distal cross-section through the proximal femur displays the anterior, medial and posterior compartment musculature, neurovascular bundles (femoral artery and vein, deep artery of the thigh, and the sciatic nerve), and tributaries of the great saphenous vein.

Posteriorly the gluteal region has been dissected to demonstrate deep structures. The gluteus maximus and gluteus medius muscles have been removed exposing the piriformis muscle. Superior to piriformis the superior gluteal artery and nerve pass laterally towards the gluteus minimus. Inferior to piriformis the inferior gluteal artery and nerve are visible (and pinned towards the sectioned edge of the gluteus maximus. The sciatic nerve and posterior cutaneous nerve of the thigh are also visible exiting the greater sciatic foramen inferior to the piriformis, running superficial to the lateral rotators (superior and inferior gemelli, obturator internus, quadratus femoris) and common origin of posterior thigh muscles (semitendinosus, semimembranosus, long head of biceps femoris) from the ischial tuberosity. The sacrotuberous ligament has been sectioned to show the internal pudendal artery and pudendal nerve exiting the greater sciatic foramen to wrap around the sacrospinous ligament and coccygeus muscle to enter the lesser sciatic foramen. The fat of the ischioanal fossa has been removed to demonstrate the course of these vessels in the perineum just lateral to the levator ani and external anal sphincter muscles.

Anatomical Model- Female left pelvis and proximal thigh has a rating of 0/5 based on 0 reviews.