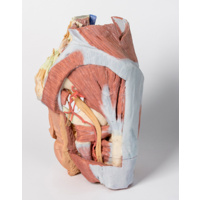 SKU: MP1785
Rating:
This 3D printed specimen represents a female right pelvis, sectioned along the midsagittal plane and transversely across the level of the L4 vertebrae and the proximal thigh.

The specimen has been dissected to demonstrate the deep structures of the true and false pelves, the inferior anterior abdominal wall and inguinal region, femoral triangle and gluteal region.

Internal anatomy The muscular boundaries of the inferior abdominal cavity are defined posterolaterally by the quadratus lumborum, iliacus and psoas muscles; anteriorly by the (varyinglyexposed) external and internal abdominal oblique muscles, the transversus abdominis and rectus abdominis. Inferiorly in the pelvic cavity, the obturator internus is visible traversing through the lesser sciatic foramen inferior to the sacrospinous ligament. Fibres of coccygeus merge with those of the sacrospinous ligament. Piriformis has been sectioned, with both origin visible within the cavity (and part visible in the gluteal region).

The common iliac artery arises from its cut edge at the level of L5, bifurcating at the level of the sacral promontory into the external and internal iliac arteries. The external iliac artery crosses the pelvic brim to give off the deep circumflex iliac artery and inferior epigastric artery before exiting the pelvis deep to the inguinal ligament. The internal iliac artery runs posterolaterally, giving the iliolumbar artery posteriorly and lateral sacral arteries which enter the anterior sacral foramina. A radicular artery entering the anterior foramina of the coccyx can also be seen. Inferiorly, the superior gluteal artery, inferior gluteal artery and internal pudendal artery exit the pelvic cavity through the greater sciatic foramen. A branch from the inferior gluteal artery, supplying psoas, travels anteriorly along the pectineal line. Anteriorly, the umbilical artery gives off the superior vesical artery (supplying the bladder) before terminating against the anterior abdominal wall as the medial umbilical ligament. Posteriorly, the inferior vesical artery arises from the obturator artery before exiting the pelvis through the obturator canal. The uterine artery crosses over the ureter to enter the remnants of the broad ligament.

The major veins preserved are the inferior epigastric vein and deep circumflex iliac vein draining into the external iliac vein, and the iliolumbar vein and lateral sacral vein draining into the internal iliac vein. The external iliac vein and internal iliac vein unite to form the
right common iliac vein which, at the level of L5, joins the (cut edge) of the left common iliac vein to become the inferior vena cava. Two veins pass horizontally across iliacus and quadratus lumborum. Of the peripheral nerve structures preserved in this specimen, the lateral femoral cutaneous nerve passes laterally across the superficial aspect of the iliacus muscle and the femoral nerve is visible deep to the psoas major muscle. The genitofemoral nerve lies on the superficial surface of the psoas major, and the course of the genital branch entering the deep inguinal ring and the femoral branch passing deep to the inguinal ligament can be followed. The obturator nerve is also seen passing from deep to the psoas muscle anteriorly to the obturator foramen. In the true pelvis the lumbosacral trunk crosses the pelvic brim and joints the anterior ramus of S1.

The S1-S3 anterior rami are visible and can be followed as they pass through the greater sciatic foramen and enter the gluteal region. In addition to the muscular and neurovascular structures, parts of pelvic viscera have been preserved. Posterior to the pubic symphysis the median umbilical ligament extends superiorly from the bladder to the anterior abdominal wall.

Anatomical Model- Female right pelvis has a rating of 0/5 based on 0 reviews.