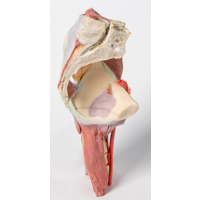 SKU: MP1813
Rating:
This 3D printed specimen presents a deep dissection of a left pelvis and thigh to show the course of the femoral artery and sciatic nerve from their proximal origins to the midshaft of the femur.

Proximally, the pelvis has been sectioned along the mid-sagittal plane and the pelvic viscera are removed.

In the pelvis the coccygeus muscle spans between the sacrum and iliac spine and the obturator artery and nerve entering the obturator canal superior to the obturator membrane. The lumbosacral trunk is visible descending to join the S1-S3 ventral rami to form the sciatic nerve. The nerve exits the pelvis via the greater sciatic foramen (defined by the preserved sacrotuberous and sacrospinous ligaments) and passes superficial to the preserved gluteus minimus, piriformis, obturator internus, superior and inferior gemellus, and quadratus femoris muscles. The posterior compartment muscles of the thigh have been dissected to demonstrate the course of the sciatic (and constituent tibial and common peroneal components) as it descends towards the popliteal fossa.

Just lateral to the lumbosacral trunk in the pelvis are the iliacus and (partial) psoas muscles, as well as the proximal portion of the rectus femoris. The femoral artery is preserved as it crosses the superior pubic ramus, giving rise to the superficial circumflex iliac and superficial epigastric arteries as they enter the proximal thigh. As the femoral artery crosses through the femoral triangle, the medial and lateral circumflex femoral arteries arise and are distributed through the medial and anterior compartment; including several branches entering the preserved vastus lateralis muscle. The profunda femoris (deep artery of the thigh) also arises proximally and descends giving off perforating branches to the posterior thigh muscles. The removal of the anterior and posterior thigh muscles provides a view of the femoral artery passing across the superficial surface of the adductor muscles and exiting the femoral triangle. The obturator externus muscle also passes from the anterior surface of the obturator membrane towards the trochanteric fossa of the greater trochanter.

Anatomical Model- Lower Limb deep dissection of a left pelvis and thigh has a rating of 0/5 based on 0 reviews. 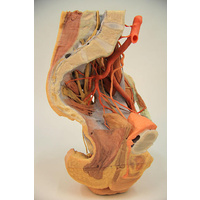