SKU: MP1660
Rating:
Lateral aspect of the face: A window has been created to expose the parotid region.

Lateral aspect of the face: A window has been created to expose the parotid region.

The pinna of the ear has been left intact, however the mastoid process has been exposed by reflection of the sternocleidomastoid (SCM) muscle. The parotid gland has been carefully removed to display structures which are normally embedded or hidden by the gland. The attachment of the posterior belly of digastric arising from the digastric groove medial to the mastoid process can be clearly seen. The masseter muscle is identifiable as it inserts into the lateral surface of the ramus and angle of the mandible. The condyle of the mandible can be seen in an opened temporomandibular joint (TMJ). The articular disc of the TMJ is indicated by a blue/grey colouration. The external carotid artery (ECA) can be seen passing deep to the digastic muscle and tendon. The branches of the ECA including facial artery, the maxillary artery, occipital artery and posterior auricular artery are preserved. At the inferior aspect of the dissected window one can see the cut remains of the internal jugular vein (IJV) and the cut upper surface of the submandibular gland and the hypoglossal nerve winding around the ECA on its lateral surface. The vagus nerve is just visible between the ECA/common carotid and the IJV. Emerging posterior to digastric one can see the spinal part of the accessory nerve superficial to the levator scapulae muscle (stretched due to the manner in which the SCM has been reflected).

The facial nerve can be seen emerging from the stylomastoid foramen immediately posterior to the styloid process and dividing into temporal, zygomatic, buccal and marginal mandibular branches on the face.

The branches of the trigeminal that supply the dermatomes of the face are illustrated diagramatically by painted nerves on the skin of the face.

Brain and cranial cavity: The medial surface of the cerebrum with the corpus collosum and thalamus are demonstrated. The septum pelucidum has been removed. The left hemisphere of the cerebellum and cerebral hemispheres have been removed to expose the floor of the left anterior, middle and posterior cranial fossa and the fourth ventricle. The anatomy around the cavernous sinus and sella turcica is well displayed. The intracranial course of cranial nerves II, III, V, VII, VIII, IX, X and spinal part of XI are also highlighted from their origin from the brainstem. The facial canal has been opened by removal of part of the temporal bone to expose the facial nerve, the geniculate ganglion and its course in the middle ear (due to removal of the tegmen tympani).

Medial surface: The parasagittal cut surface shows the lateral ventricle, the right cerebral peduncle, posterior cerebral artery, and the cut edge of the tentorium cerebelli. In the region of the sphenoid the internal carotid artery and the carotid siphon are visible in the cavernous sinus as it pierces the dural roof (pale green) to commence its intracranial course. Here it lies lateral to the right optic chiasm. The mouth, tongue, associated muscles, lateral aspect of the nasal cavity, nasopharynx, and cut muscles and vertebrae are also visible on the medial surface of this parasagittal section.

Anatomical Model- Head and Neck has a rating of 0/5 based on 0 reviews. 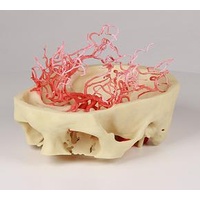