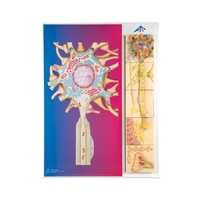 The Physiology of Nerves series displays the basic structures of the human nervous system.

Neuron Cell Body
Typical neuron body with cell organelles, for example mitochondria and many other characteristics of human cell, are visible through a removable transparent cover. The edge of the cell body also shows the synapses of connected neurons.

Myelin Sheaths of the CNS
This model shows the glial cells which build the insulating layer around the axons of the central nervous system.

Schwann Cells of the PNS
Depicts a Schwann cell with sectioned core.

Synapse
Featuring the endoplasmic reticulum, mitochondria and the membranes of the synaptic gap.

The nerve set is a great tool for teaching the anatomy and physiology of the human nervous system.

Physiology of Nerves has a rating of 0/5 based on 0 reviews. 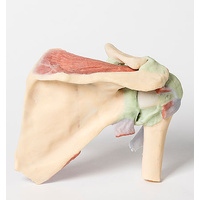