Our range of breast models are perfect for educationg in basic breast anatomy or teaching breast self examination (BSE) or medical examination. View our largest range of anatomical breast modes to ensure that clinicians and students have a strong understnading of complete breast models, cross sectional models and wearable breast models 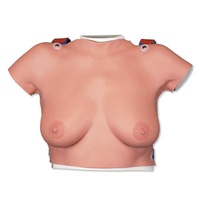 Our anatomically correct breast models are ideal for teaching how to identify signs of breast cancer, and the fundamentals of female breast anatomy, as well as promoting awareness. We offer a range of breast models which can be used for display or demonstration purposes, training tools for breast self-examination (BSE) or as references for women’s health education and anatomy classes.

One of the common uses for breast models is to help educate and train individuals how to properly perform breast self-examinations (BSE) in order to detect signs of early breast cancer.

Models specifically designed for demonstrating the physical differences between a healthy breast and one that has a tumour, whether benign or malignant, are often modelled to be as realistic as possible. The tactile feedback it provides makes it a more effective tool for practising breast self-exams because it closely recreates how lumps will actually feel like beneath the skin and other underlying tissues.

It can be setup to represent a normal healthy breast then quickly reconfigured to contain benign or malignant tumours, as well as other anomalies that one may encounter during a breast exam. This allows the patient or student to quickly compare and discern the differences between a healthy breast and one that has developed lumps. These wearable models can also be worn and used either standing up or lying down.

It is made out of 3B Scientific’s SKINlike high-quality silicone, which is the same material used in a number of its realistic anatomic models, and has been dermatologically tested to provide an authentic tactile feel. It is also modelled after a full-sized female upper body with medium-sized breasts for added realism.

All wearable models come with a harness and stand. The more expensive model also comes with a carrying case for storage and convenient transportation.

In some situations, a wearable breast model may not be completely necessary or even feasible due to its size and relative bulk. In such cases, we offer a Standard Breast Exam model, also made by 3B Scientific.

This Standard Breast Exam Model features 3 life-like models of single breasts each one with different characteristics for easy comparison. One is a model of a healthy breast, while the other two simulate breasts with benign and malignant tumours in various stages of development.

These models feature the same 3B SKINlike high-quality silicon used in the wearable models. Due to each model’s size, it can be more practical in a classroom or clinic setting where it can be passed around and examined with relative ease, compared to a model of a full female torso. It also comes with a moulded base for convenient storage.

This mounted set of left and right breast models is an invaluable teaching tool that helps students and patients alike get a glimpse of the internal anatomy and pathological differences that can lie beneath the skin.

The right breast represents a lactating breast and is medially divided into 2 halves with one half illustrating what a healthy breast looks like underneath, and the other half showing what a mastitis or gland inflammation looks like from both the outside, as well as inside.

The left breast represents a non-lactating breast and features several cuts and windows that show different medical conditions such as regional lymph nodes, cysts, fibroadenomas, fibrocystic breast disease and malignant tumours. It is separated into 3 different parts, which allows the model to illustrate multiple planes of the breast’s internal anatomy.

The internal structures of these models have been textured to mimic the look of the different layers of subcutaneous tissue for added realism. The model itself is made out of tough and durable materials that can withstand years of use and in-depth study.

This activity set provides a number of useful tools to help facilitate discussions on women’s health issues, pregnancy and basic health education. It features a fully detailed model of the lower part of a healthy and mature female torso with partially sectioned organs with a magnified cross section of the ovum to illustrate the concept of fertilisation.

Additional visual aids and study guides are also included to further discuss the inner workings of the female reproductive system. The guides were developed by 3B Scientific with different age groups in mind, ranging from pre-teens, teenagers to young adults.