Perfect for CPR and Airway Management

SKU: LF03765
Rating:
The Basic Child Crisis Manikin is the perfect manikin to teach CPR and ALS procedures as it is comes with an advanced airway for the practice of life saving techniques.

The manikin is based on a  5-year-old child, the Child CRiSis™ Manikin provides complete PALS training capabilities, it combines all of the skill stations on one manikin, making training more realistic and giving students an appreciation for the smaller scale of the patient.

The Life/form® Child CRiSis™ Manikin is anatomically correct in detail. Realistic anatomy and landmarks include a mouth, tongue, oral pharynx, epiglottis, arytenoids, vocal cords, trachea, and esophagus. In addition to the palpable and visual landmarks, the head, neck, and jaw are fully articulated, allowing a realistic jaw thrust feature.

The manikin has full CPR capibilities:

The manikin is specifically designed for training of;

The manikin does not come with a hard carry case as standard but is available separately.

Life/form® Basic Child CRiSis Manikin* has a rating of 0/5 based on 0 reviews. 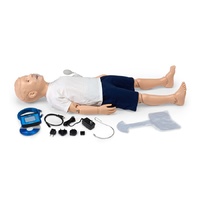