After two years of development, several prototypes and extensive testing the Conscious Casualty / Surf Life Saving manikin was produced. During the testing the dummy was also found to be suitable for Jet Ski rescue training and other general rescues scenarios.

For IRB driver training you can now train year round, in the roughest surf, close to the reef and in the coldest weather to practice those fast pick ups as many times as you like. This dummy never complains about the cold water, the aching arms and the sore shoulder or jaw from when the rescuer slightly misjudged the pick up! These manikins will provide a uniformity in the size and weight of casualties being rescued, an important factor in competitions.

The problem for many SLS clubs is to find enough willing volunteers to act as a patient for the IRB rescue teams for practice, especially during the colder months - consequently, skill development suffers. Inflatable Rescue Boat (IRB) competitions/training aims to:

WHO USES THEM? For IRB Racing, the dummy attaches to the 'can' using a webbing leash with a velcro connection.  The leash attaches around the neck of the dummy.  As you grab the dummy with your arm through the dummies arms the velcro releases and you drag it into the IRB. The weight you are hauling is the dry weight of the dummy plus the water that has ingressed into the dummy, ~ 40+ kg Once in the IRB, the water runs out of the dummy and quickly returns to about 20kg which makes for reasonably easy weight management.

The orange overall is made of polyurethane coated polyester which is resistant to salt water.  Polypropylene webbing is stitched to the overall in all high-stress points. Beneath the overall the carcass is a tough nylon mesh, as used in our standard water rescue dummy which has been used by NATO military rescue dummies for years.

Conscious Casualty / Surf Life Saving IRB Training has a rating of 0/5 based on 0 reviews. 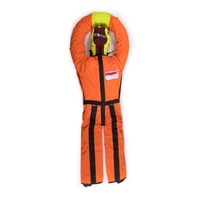 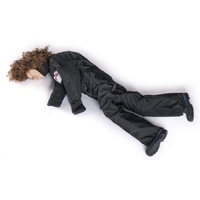