Mentone Educational is pleased to offer our range of bariatric and oversized manikins to simulate rescue scenarios for bariatric patients to ensure that rescuers are ready for all situations. Bariatric Rescue Dummy- up to 260kg 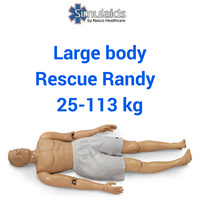 Why should you be training using bariatric manikins?

Globally and specifically in the Australian market obesity and bariatric patients are unfortunately on the rise. Bariatric patients are at higher risk of health-related issues and therefore high risk for being involved in rescue situations. In addition, overweight individuals provide their own challenges in terms of a rescue as the ability to maneuver and handling is more difficult than would otherwise be for a standard rescue.

What types of oversized or rescue manikin brands are available?

Mentone Educational offers both the Ruth Lee and Rescue randy range of manikins.

The Ruth Lee is a UK manufactured range of manikins which offer specialized rescue manikins for all applications. These manikins represent a sack of flour type structure where a thick outside with soft interior.

The Rescue Randy range of manikins are manufactured in the US by Nasco and are heavy duty manikins which are largely designed for intense training situations. The deisng of this manikin is a manikin with articulating joints to allow for numerous positioning of the manikin.

What bariatric rescue manikins are available and what are their weights?

The rescue randy range of manikins offer large body options which simulate large body structure patients rather than those which are overweight. The rescue randy oversized manikins are available in 106 and 118 kilo grams with the height of the manikin representing an average male.

Can team training be conducted with these manikins?

Are these rescue manikins realistic to use, do they simulate a real patient?

Both the Rescue Randy and the Ruth Lee have been designed to not only be durable but offer real learning outcomes with hyper realistic simulation. The Ruth Lee range has been designed to ensure that movement of the manikin is fluid rather than feeling like a dead weighed manikin. Similar the Rescue randy manikins have some very realistic articulating joints so that students will be required to manage the manikin like they would with a real person.